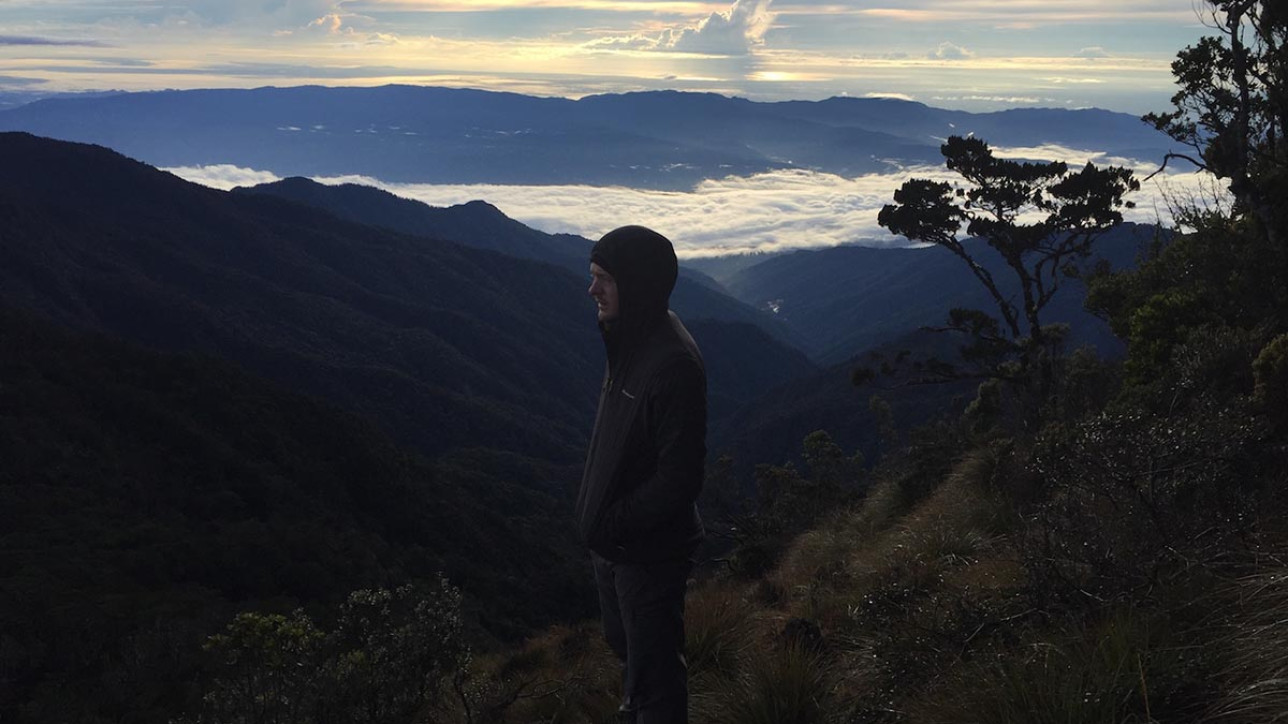 From June 13 through to June 25, 2016, our group of nine trekkers flew to Kokoda before driving to Kanga Village to commence our expedition. The group was comprised of a small collection of Australian trekkers as well as a team of 24 local porters who aided in carrying supplies, and created the trail in front of us as we climbed. The expedition lasted 12 days and looped around the Owen Stanley mountain range finishing in Komo village.

Weather conditions were challenging; with variable climatic zones from humid and tropical to sub-alpine. Engulfing mist, rain, and fog were prevalent in higher altitudes, with temperatures as low as 2 degrees in some campsites.

Physical and mental endurance was key, as the terrain underfoot was demanding and diverse, the ridge line was narrow in many places, tree roots were positioned high above the ground at times; they were sometimes intricate to navigate through and difficult to balance on. Extreme weather conditions were testing and high altitude was acutely sickening during our ascent with complaints of nausea and upset bellies.

We camped in the narrowest ridgelines, in dense forests, next to glacial lakes at 3600 metres, and in wet and windy storms. We were all seeking an adventure like no other, and adventure is what we found.

We hadn’t even started walking yet and we were already experiencing small (but hardly surprising) set-backs.

Hurdle number one: the wrong plane had been sent for us, so we had to get rid of some supplies including a substantial amount of our food.

Hurdle number two: we attempted to buy the food that had been left in Port Moresby, but in a store in Kokoda on arrival. Negotiations lasted an hour or so until finally a price was agreed and we were back on our way.

We drove on to the furthest possible point until we came to the end of the road at Ebei Village. We began by crossing numerous creeks and traipsing our way through mud before finally reaching Kanga Village later that afternoon; where the people are friendly, the pigs are in abundance, and their greeting was filled with song, dance, and floral offerings.

They insisted that we camp in the centre of their village for the night; their curiosity almost intrusive but their hospitality and good intentions apparent by sharing their food with us and letting us bathe in their was was.

The Climb and Loop Around: Days 2 through 5

Before departing Kanga Village to begin our first steep ascent up the mountain range, we were waved off by the entire village including all the children who gathered to watch our every move as we packed our belongings.

It was the first time some of these children had seen white folks, so needless to say the entire interaction was confronting yet humbling for everyone involved.

They followed us for a short while as we began to climb, but turned back as we pressed on.

Some days we trekked for hours over undulating terrain, climbing up tree roots dangling over 20 metre drops below, and navigating our way through thick, virgin jungle. The air was heavy and humid making us drip persistently with sweat. Leeches were in abundance through out this section of the trek, so a heavy-duty deet and tight gaiters were a must!

We camped on narrow ridgelines and in dream-like parts of the rainforest. Man-made toilets were also well constructed on this part of the trek – ask Zac about the majestic toilet surrounded by ferns in the “Fern Gully” campsite.

Altitude sickness and fatigue were beginning to set in amongst some of the other trekkers around Day 4, after passing an elevation of 2000 metres. The nights were becoming cooler, and the humidity was starting to disappear.

The jungle was becoming less and less dense the further we climbed, and by day 5 we had begun to reach the openness of the grasslands, signifying to beginning of a five-day-dog-leg-turn around the mountain range.

The grasslands were a welcome change of scenery. After days of maneuvering through jungle and plentiful forests, the grasslands gave some much-needed spacial freedom. We trekked through fields of dewy spiders webs, being able to see Mount Victoria by our side in all her glory.

On day 6 we reached the glacial lakes one early afternoon, but decided not to press on because the sun was still high in the sky, allowing us to dry our tents and contents of our packs, as well as bathing fully for the first time in almost a week.

Following the glacial lakes, we pressed on to Mount Thynne and somewhere just further than Dickson’s Pass by day 8.

Day 9 saw us attempt to reach the base of Mount Victoria but were stopped by the rain in the late afternoon. We had been extremely lucky up until this point; the weather had held off until now.

The landscape had now changed back to forests, and we weaved around the trees, climbing in search of the summit. The wind was howling and visibility was only about 50 metres, yet we still managed to discover the remains of a local who had unfortunately not been as prepared as us in the way of clothing and supplies.

Searching over each spur we eventually gave up and camped on the other side of the ridge, shielding us from the wind for the evening. We were now a day behind schedule.

The morning had begun with clear views of Port Moresby and surrounding areas – a nice change of pace as the two days previous had been filled with rain, cloud, and mist.

Unfortunately, however, the weather turned while we were atop the summit and we got caught out in a storm where we were forced to seek temporary shelter for a few hours while we waited it out. We were wet and cold and the daylight was fast disappearing, so it was necessary to stop and regroup before deciding our next move.

Walking in the dark with limited head torches wasn’t ideal, but we had no choice as it was around 7pm before we left our temporary shelter. Most of the porters had run off ahead and had already set up camp, making it challenging to find them again in the dark. Luckily, we were able to find the campsite after setting of that morning at our usual 8am departure time and arriving in after 11pm. It’s safe to say that we were all happy to see our tents set-up when we arrived!

It was a slow start the next morning but we knew we had to get walking to get to Komo village that evening to ensure we got our flight from Kokoda the following day.

And boy, did we walk! To make up the time we’d lost in the last few days of bad weather, we walked for 19 to 22 hours per person (depending on when you arrived at the village), with the earliest arrivals of trekkers into Komo Village being somewhere around 2:30am.

Our feet, wet from days of rain, were suffering from trench-foot, and we were hungry from walking all day. Although admittedly it was nice to finally sleep on a flat surface in the safety of the village when we finally arrived.

We finished our trek back at Kokoda airport. All looking disheveled, dirty, hairy, and many of us had lost weight. We all watched as the groups of fresh Kokoda trekkers exited their planes on the grassy runway, and sniggered at the “easy walk” that lay ahead of them.

This Mount Victoria expedition is de finitely not Kokoda, nor is it f or the fain t of heart. (“Can we go back to Kokoda now?” remarked a couple of the porters who usually work the Kokoda track.)

It was dangerous at times, testing in physical and mental endurance, and the unrelenting PNG weather hindered our progress.

It was a trek that ventured into the unknown, a pioneering endeavour where we were all at the mercy of the PNG wilderness and unpredictable weather.

But it was the greatest, most awesome adventure I had ever embarked on.