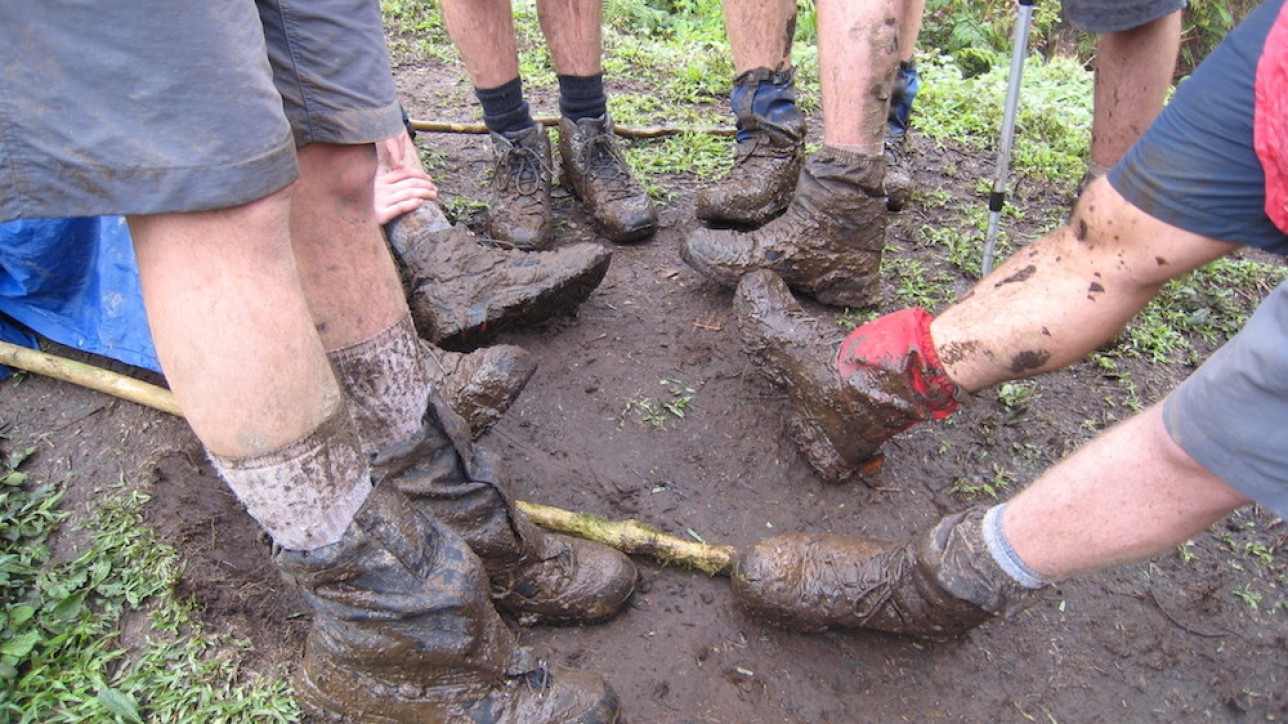 The right boot can be the difference between an enjoyable walk and abject misery. I have seen some disasters, including the soles of one set of boots become completely separated during a trek in Nepal, leaving the hapless walker to use gaffa tape to keep the soles somewhat in place. I’ve owned over a dozen boots for over the 40 years of walking and have tried everything from walking in army boots and mountaineering boots on the Dart-Rees track in NZ to the lightweight and humble Dunlop volleys. Mind you, I haven’t been courageous enough yet to wear the low cut gumboot style shoe that is de-rigueur for Balti porters. From my long experience, there is no substitute for selecting and fitting the right boot for the job and thereby saving your feet from torture.

There is an enormous array of boots on the market, and increasingly the traditional full-grained leather walking boot is no longer in favour, with the composite full, mid and low cut boot and event style shoe making significant inroads. Modern materials such as nubuck, suede, gore-tex and other synthetics are allowing greater experimentation with different fabric mixes to give strength, waterproofness and durability at a lower cost and weight to the traditional boot. The broader range of boots on the market also reflects the changing nature of bushwalking as well as changes in footwear fashion. Fewer people are walking off track in demanding environments such as snow, ice, scrub, mud or moraine with most boots and shoes now sold, designed for use on formed tracks. If you intend to walk in more demanding environments it is important not to just go for a lighter shoe out of habit as it just may not be up to the job. In some instances, the wrong shoe could have serious consequences you – just try walking on a glacier in a pair of low cut event style shoes or kicking steps through a snow drift.

As a general rule, the longer the walk, the heavier the pack and the rougher the terrain, the more rigid and durable a boot needs to be and with specific ankle support. Without supportive boots, walkers have a higher probability of suffering sprained ankles and slow the progress of the rest of the group. However, while rigid, solid and heavier boots take more effort and energy to walk in, they can be quite hot and also easier to get blisters. Walkers carrying light packs on formed trails will find such boots cumbersome, so the lighter weight shoes provide more comfort and greater flexibility.

Ultimately your choice of boot will get down to what your requirements are and the range of conditions you will be using the boots. I have listed below some factors to consider when selecting boots.

Walking in a heavier boot does take effort but in more rugged conditions, the heavier weight of a boot provides significant capability. For example, a heavier boot with rigid shanks can be driven into snow, ice or hardened earth to provide an edge, toe or platform to stand on. Instep crampons can be worn and the boot’s weight affords greater stability and grip on most difficult surfaces. Lighter boots are more suitable in hot climates, even walking surfaces and hard pavements such as those found on popular trails like the Everest region.

Generally speaking, the boots that cover the ankle-bone will provide greater lateral support than the lower cut boots. They also have a higher water entry line, making them more suitable for walking in mud, snow and streams.

Lighter boots generally have softer soles, not dissimilar to those found on many running shoes. The softer soles tend to have better shock absorbing capacity and some manufacturers are experimenting with shock absorption sacs – similar in style to some jogging shoes. The harder rubber Vibram soles being the most predominant, have less shock absorption properties but tends to be tougher, harder wearing and more durable. The harder materials are impervious to stones, sharp sticks and other hazards found in the surface however it is harder to feel the surface and it can be easier to trip or snag the boot whilst walking because of the masking effect of the sole.

Full-grained leather is the traditional material for bush walking boots and it is a tough, thick, long lasting and water-resistant material. Even when scuffed badly over difficult terrain, it is very easy to renourish and recondition leather back to its original state using waxes. Top end leather boots are beautifully crafted and shaped to fit a foot, often with minimal stitching. Nubuck is another form of leather having been brushed, leaving a rougher surface. The rougher surface tends to hide the cuts and scuffs. Like full-grained leather it is naturally waterproof and can be combined with breathable waterproof fabrics to give them extra water resistance. Suede or split leather is a cheaper and thinner material and is more common in the construction of the lower to mid-priced boots. It is often combined with synthetic fabrics to produce a boot that is comfortable and flexible. However, boots that use composite materials tend to have more stitching, that is both an entry point for water and becomes a failure point in boots that are subject to wear.

Wearing the boot and walking in it, as well as testing for torsional rigidity by twisting the boot can test flexibility. Extra stiffness is often added by manufacturers through the addition of materials, such as shanks and collars. A stiffer boot that does not flex as much is harder to walk in but over time these boots do loosen up and mould to your feet, a process called “breaking in”.

Most manufacturers claim that their boots are waterproof, but most of these claims need to be taken with a grain of salt. In reality, unless it is a double plastic mountaineering boot, water will eventually ingress the boot, particularly if you are walking in persistently inclement weather or in wet and muddy terrain. Many manufacturers use gore-tex or other water resistant fabrics to create an impervious layer. Whilst this helps, the layer does break down through wear and tear. Seams are potential entry points and the composite boots by the nature of their construction have many more seams than a full leather boot. Quality leather boot construction involves eliminating as many seams as possible. The biggest source of water ingress is through the top of a boot, hence the higher cut boots provide a definite advantage over the low and mid cuts. The material and design of the boot tongue has a big part to play and it should include side webbing extending right to the top of the eyelet for maximum waterproofness.

From my experience most composite boots fail in the area around the side of the boot at its widest point, usually with the stitching coming apart or where the toe and sole are joined. I’ve rarely worn out the sole rubber first.

A number of manufacturers have men’s and women’s models, usually with a different name to the male counterpart. As well, many provide a range of widths from narrow, medium to wide. Men’s boots tend to be wider and have a broader range size, whereas women’s boots are narrow in the foot, lower in height and also tend to have narrow sleeves for the achilles heel. It is vital that your boots fit you as comfortably as possible and sometimes you may find a model that suits you irrespective of the gender tag on the boot. As Australia is a small market with many brands, it can be sometimes difficult to get the size that suits you so be prepared to try as widely as you can.